A Spotlight on the National Day of Action for Families of MMIWG, Survivors of Gender-Based Violence, and Indigenous Women, Girls and 2SLGBTQQIA+ People

Friday, June 3rd, 2022, was the first anniversary of the launch of the National Action Plan on Missing and Murdered Indigenous Women, Girls, and 2SLGBTQQIA+ people. In the capital region, this day was marked by a private ceremony and a National Press Conference at the Canadian Museum of History in Gatineau, Quebec, and an independent Press Conference hosted by the National Family and Survivors Circle, at the Odawa Friendship Centre in Ottawa, Ontario.

The private ceremony was attended by Prime Minister Trudeau who brought the sacred bundle presented to him three years ago at the end of the National Inquiry process. Sylvia Maracle, Chair of the 2SLGBTQQIA+ Sub-Working Group, and other representatives of the 2SLGBTQQIA+ community spoke at the ceremony and presented a separate sacred bundle on behalf of their community to the Prime Minister. 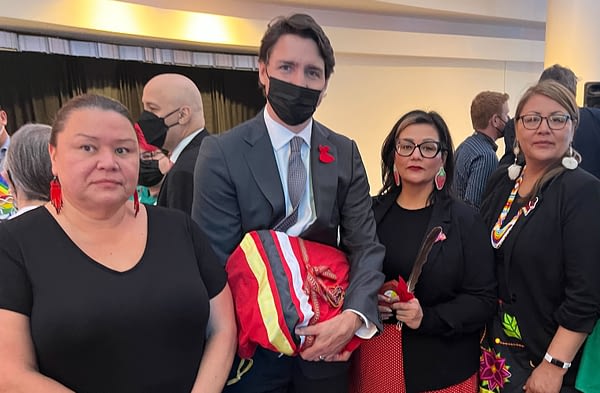 The National Family and Survivors Circle utilized the June 3rd public events as a platform and opportunity to highlight the lack of action and accountability. The NFSC called on all governments, including Indigenous governments, agencies, institutions, organizations, and industries to uphold their commitments to ensure concrete actions and measurable outcomes are put in place to prevent the ongoing genocide of Indigenous women, girls, and 2SLGBTQQIA+ people.  We also reminded them of the importance of centering MMIWG2S+ family and survivors of gender-based violence in all process and mechanisms that impact them as they have the lived experience and expertise.

Image source: “Photo of the Day” – The Hill Times.

“It is with deep disappointment and frustration that I say the lack of accountability is staggering and unacceptable,” said Hilda Anderson-Pyrz, Chair of the National Family and Survivors Circle. “This is a national shame — and it is also dangerous. Each day of inaction leads directly to the tragic loss of human life and further violence.”

“I cannot state this enough: without the political will to create transformative change, this genocide will continue. The government MUST be accountable for its responsibility to the 231 Calls for Justice. These are legal imperatives, and they are NOT optional,” said Hilda Anderson-Pyrz.

“And quite frankly, the message to Canada is – This is your mess and we need help cleaning it up,” said Maracle. “It should not be all on us to do.”

The ministers acknowledged that the country continues to fail Missing and Murdered Indigenous Women and Girls and 2SLGBTQQIA+ People and that not enough has been done. Minister Marc Miller, Crown-Indigenous Relations, committed to the establishment of an oversight body and ombudsperson as soon as possible.

“This isn’t a day to make excuses, particularly since we’ve seen increased violence against women during the pandemic, but really to move forward acknowledging that criticism and the work that needs to be done,” said Minister Miller.

Minister Miller agreed that the government of Canada needs a watchdog to look at how the Calls for Justice are implemented and to hold government to account. He also stated that there is much more work to do, and the federal government remains committed to seeing this work through.

Minister Hajdu acknowledged the need to dismantle colonial powers to create systemic change and echoed her commitment to the cause.

The event was followed by an independent Press Conference held by the NFSC at the Odawa Friendship Centre in Ottawa, where Anderson-Pyrz elaborated on the points made at the previous event.

“Justice for families, survivors, Indigenous women, girls, and 2SLGBTQQIA+ people can only be achieved when the colonial structures and approaches are dismantled,” said Anderson-Pyrz. “We all have a collective responsibility to end this genocide, and we are all part of the solution.”

While the NFSC is grateful for the support we received on June 3rd, it is important to note that the real work begins now. Now is the time to put words into action and to demonstrate political will to end the violence against Missing and Murdered Indigenous Women, Girls, and 2SLGBTQQIA+ People.

We know this can be a difficult topic. For immediate mental and emotional wellness support, the National Inquiry into Missing and Murdered Indigenous Women and Girls’ toll-free support phone line is available 24 hours a day, seven days a week at 1-844-413-6649. The service is available in English, French, Cree, Ojibway and Inuktitut.