Last week marked two major milestones for the National Family and Survivors Circle (NFSC) in our work to continually advocate that all governments, agencies, and organizations who have a responsibility in ending the genocide, centre families and survivors in their work throughout the development and implementation of the National Action Plan. On Wednesday, June 2nd, 2021, the NFSC launched “The Path Forward — Reclaiming Power and Place”, which is our complete contribution to the 2021 Missing and Murdered Indigenous Women, Girls, and 2SLGBTQQIA+ People National Action Plan (NAP). The NAP was released on Thursday, June 3rd by the Core Working Group, and on Friday, June 4th, the federal government released “The Federal Pathway”, which is its full contribution to the NAP.

The development of the NAP was not without challenges. In working with many different partners, the National Family and Survivors Circle did not always get what we advocated for. But throughout the process, we worked diligently to uphold our integrity, dignity, focus, and commitment, and we achieved what we said we would during this phase: to advocate for including families and survivors in this work now and going forward.

The NFSC is hopeful that the events of this past week are a turning point in how Canada chooses to address genocide against Indigenous peoples. Following the launch of the NAP, we saw immediate debates from many different perspectives. Debate is expected, and informed and constructive feedback can help identify ways to do better.

It is our hope that everyone takes time to read and reflect upon “The Path Forward – Reclaiming Power and Place”. A 4-page summary of this over 50-page document was included in the NAP, but the full contribution provides greater detail and emphasizes ways to:

When we released ”The Path Forward” at a virtual event this past Wednesday, we began and ended with ceremony to acknowledge that this work is sacred. At the event, NFSC co-chair Hilda Anderson-Pyrz said, “We hope we’ve done justice to all the voices that couldn’t be with us at the table… the Path Forward highlights the importance of creating processes that centre families, survivors, and 2SLGBTQQIA+ people in the work.”

The significance of the moment was lost on no one. “Families, survivors, Indigenous women, girls, and 2SLGBTQQIA+ people want and deserve action now,” said Denise Pictou Maloney, NFSC Co-chair. “It is time for all governments to act immediately.” 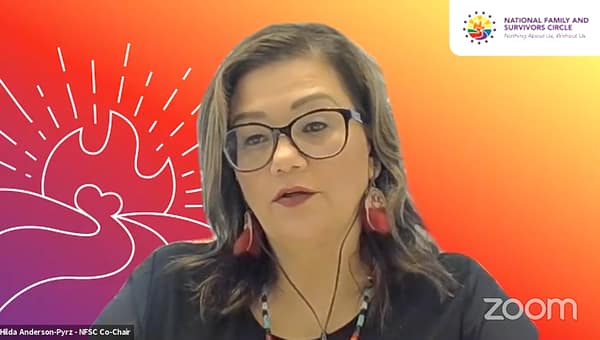 The NFSC was joined by Crown-Indigenous Relations Minister Carolyn Bennett at the event, who emphasized the importance of our co-chairs and all our members, saying, “Your advice and guidance to the Core Working Group and other contributing partners has truly made a difference.”

Ceremony was also conducted during the virtual launch of the NAP the next day. The NFSC participated in the event along with other members of the Core Working Group, Indigenous Elders, Prime Minister Justin Trudeau, Minister Bennett, and others for the release of the plan, which includes federal commitments to provide or enhance funding towards a number of programs and initiatives, with an implementation plan to follow in the fall.

The NFSC was pleased that Prime Minister Trudeau attended the launch and brought the sacred bundle presented to him two years ago at the end of the National Inquiry process. He acknowledged the sacred responsibility that goes with carrying it forward.

After NFSC’s co-chairs and other speakers highlighted the need for immediate action, Minister Bennett acknowledged the Government of Canada’s responsibility, saying, “As a government and as Canadians, we must do more, and we vow to do better to end this national tragedy.”

On June 4, the Government of Canada released its component of the NAP, the “Federal Pathway to Address Missing and Murdered Indigenous Women, Girls and 2SLGBTQQIA+ People”. It outlines a comprehensive and holistic approach to address the root causes of violence, and details concrete commitments and actions that will be taken in four key areas: culture, health and wellness, human safety and security, and justice.

Prime Minister Justin Trudeau at the June 3rd event to launch the National Action Plan, holding the sacred bundle first given to him two years ago at the National Inquiry’s Final Report Ceremony

The NAP and the next phase of this work is the opportunity for the Government of Canada, among others with obligations to act, to do the work of implementation. Ending gender- and race-based violence against Indigenous women, girls, and 2SLBTQQIA+ is sacred work that is difficult and must be collective.

As families and survivors who have been on the frontlines for decades, this is something we understand and are committed to. It is captured in our document, it is reflected in our logo, and is inherent in our guiding principle of “Nothing About Us, Without Us”.

We call upon all Canadians to read “The Path Forward – Reclaiming Power and Place” to find out ways to work with families and survivors across the country in this sacred, hard, and collective work. We are hopeful this will be an important tool for how Canada turns the corner in its approach to addressing the genocide.

Please note that recordings of the events in both French and English will be posted to our website soon.